In their foreword to the book, AMIC Board Chair Crispin Maslog and Secretary-General Ramon Tuazon  wrote: “It is not by accident that the two outstanding issues of our time—Climate Crisis and Covid-19—involve science.

“Our insanity has led the world to where it is today at the crossroads of history. Do we survive as a species, or do we go down the dustbin of history?

“We need Science and Scientists to shepherd us through these twin crises. And we need Science Research and Science Communication to help the people understand and mobilize them to act ASAP.

“AMIC  recognizes the urgency of enabling science journalists and communicators to contribute significantly to addressing current issues of human survival… Thus AMIC adopted ‘Science Communication: Managing the Now and the Future’ as the theme of its 28th Annual Conference” on November 20 and 27 and December 04, 2021.

The event, co-hosted by the Academy of Journalism and Communication (AJC) based in Hanoi, Vietnam, was the first virtual annual conference convened by AMIC.

The Book of Abstracts contains 124 abstracts of 167 papers presented by 224 presenters (inclusive of authors and co-authors) during the conference’s 18 parallel sessions. Fifteen countries were represented.

The book contains summaries of a  variety of research by Asian scholars, covering such topics as science communication theories, online education, ICT ecosystem as the new public sphere, framing the Covid-19 narrative, disinformation, media literacy, disaster risk and preparedness, health, and agriculture, among many others.

The book will be useful for communication educators, researchers and students as reference for ongoing research or as leads to future research studies.

AMIC@50: A History of the Asian Media Information Centre was launched last December on the occasion of AMIC’s golden jubilee. It is a 200-page story of the organization founded and registered in Singapore in 1971 and now based in Manila since 2015.

The book is edited by Crispin C. Maslog, a participant in the unique travelling seminar in 1971 that took 13 Asian mass communication educators on a 25-day trip to 11 cities in Asia from Singapore to Seoul and led to its founding.

AMIC is proprietor of the Asian Journal of Communication (AJC) and Media Asia. AJC comes out bi-monthly with scholarly articles preferably dealing with Asian research topics and methodologies. , Media Asia is a peer reviewed journal that focuses on practices in journalism, advertising, public relations, and other aspects of media in Asia.

The traveling seminar was followed by the Communication Teaching and Training Conference in Seoul in 1972 which recommended the First Reading Material Workshop in October 1974. The workshop urged three priority subject areas for anthologies– a history of mass communication in Asia, Asian broadcasting, and Asian journalism. This led in 1978 to the research and writing of the first AMIC book, A Brief History of Asian Mass Communication, edited by Sir Charles Moses and Crispin C. Maslog. 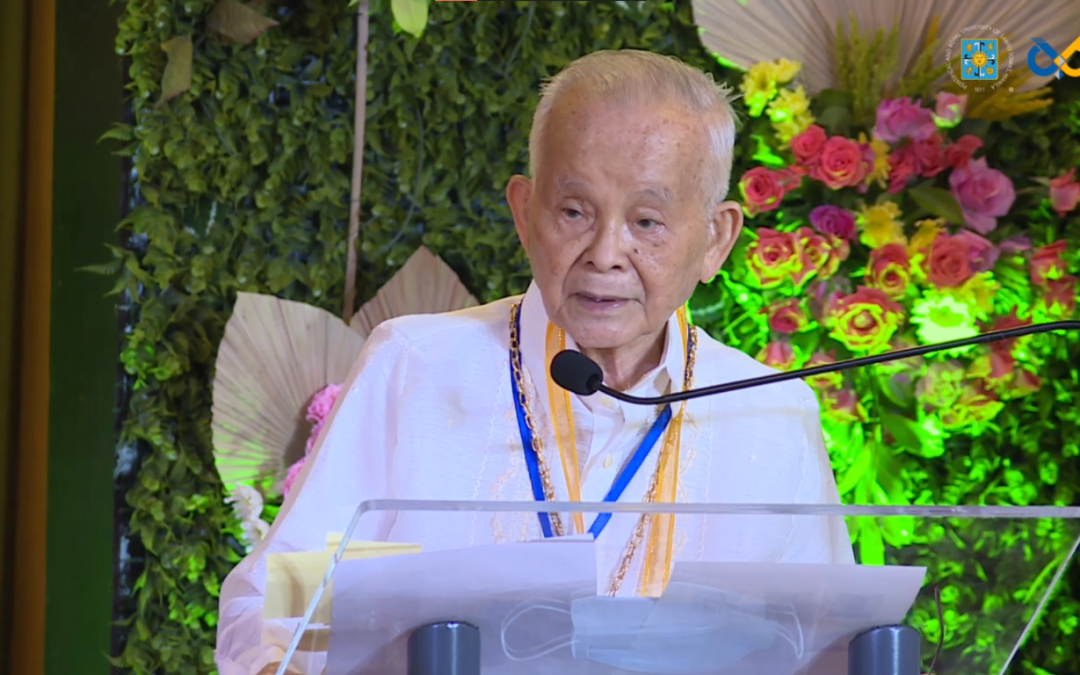 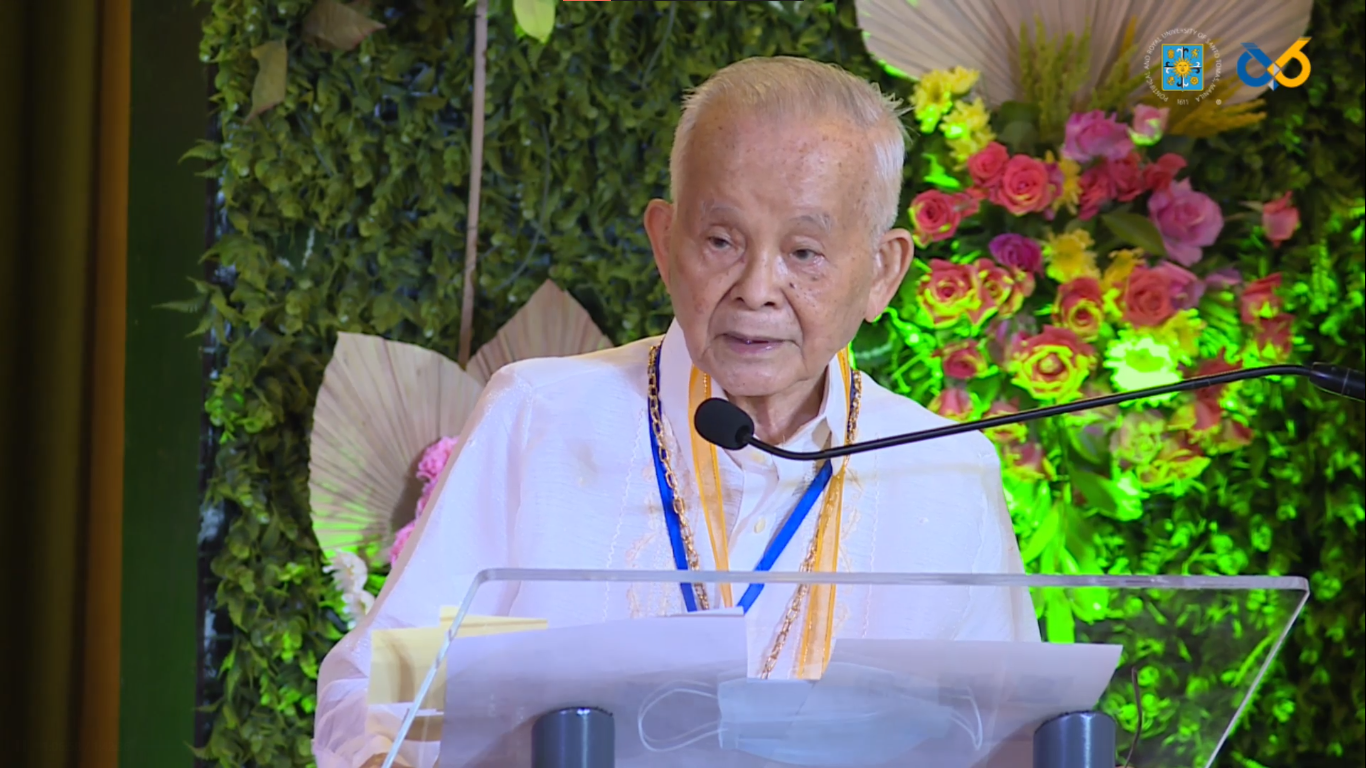 AMIC Board of Directors Chair Dr. Crispin C. Maslog received the 2022 Thomasian Outstanding Alumni (TOTAL) Award for Media. The Award is the highest honor bestowed by the University of Santo Tomas (UST) upon Thomasian Alumni in recognition of their significant and exemplary contribution to the society and the Church.

Founded in 1611, UST is one of the oldest universities in the world.

Dr. Maslog received the coveted award on 14 May 2022 along with nine other outstanding alumni.

Dr. Maslog expressed his gratitude to AMIC colleagues and friends who conveyed their best wishes, “You did make my day complete and outstanding. I hope to shake your hands again somewhere sometime.”

He then returned to the Philippines to serve as the first Director of the Silliman University School of Journalism and Communication, in Dumaguete City, Negros Oriental, central Visayas, the first school/department of journalism/communication founded outside Manila and devoted to training professional journalists for the regional press.  Maslog focused his early research and writings on the need to strengthen the Philippines regional press.

After some 15 years at Silliman, Maslog joined the University of the Philippines Los Baños as professor and later the Asian Institute of Journalism and Communication in Manila as academic vice president. A prolific researcher, author and editor, he produced some 40 books. 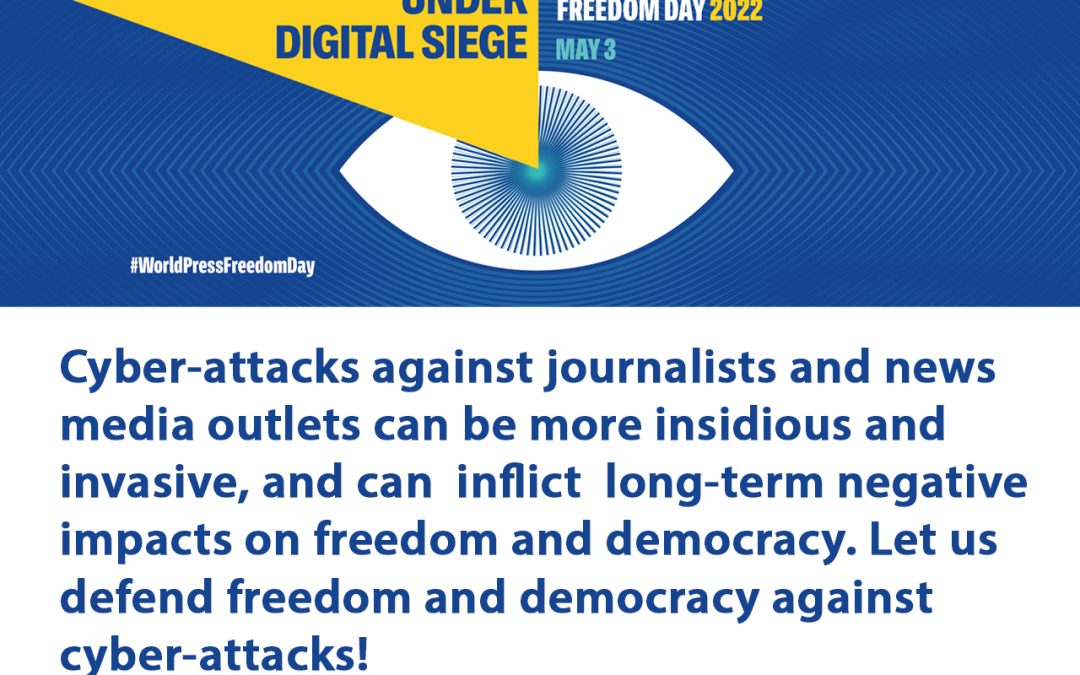 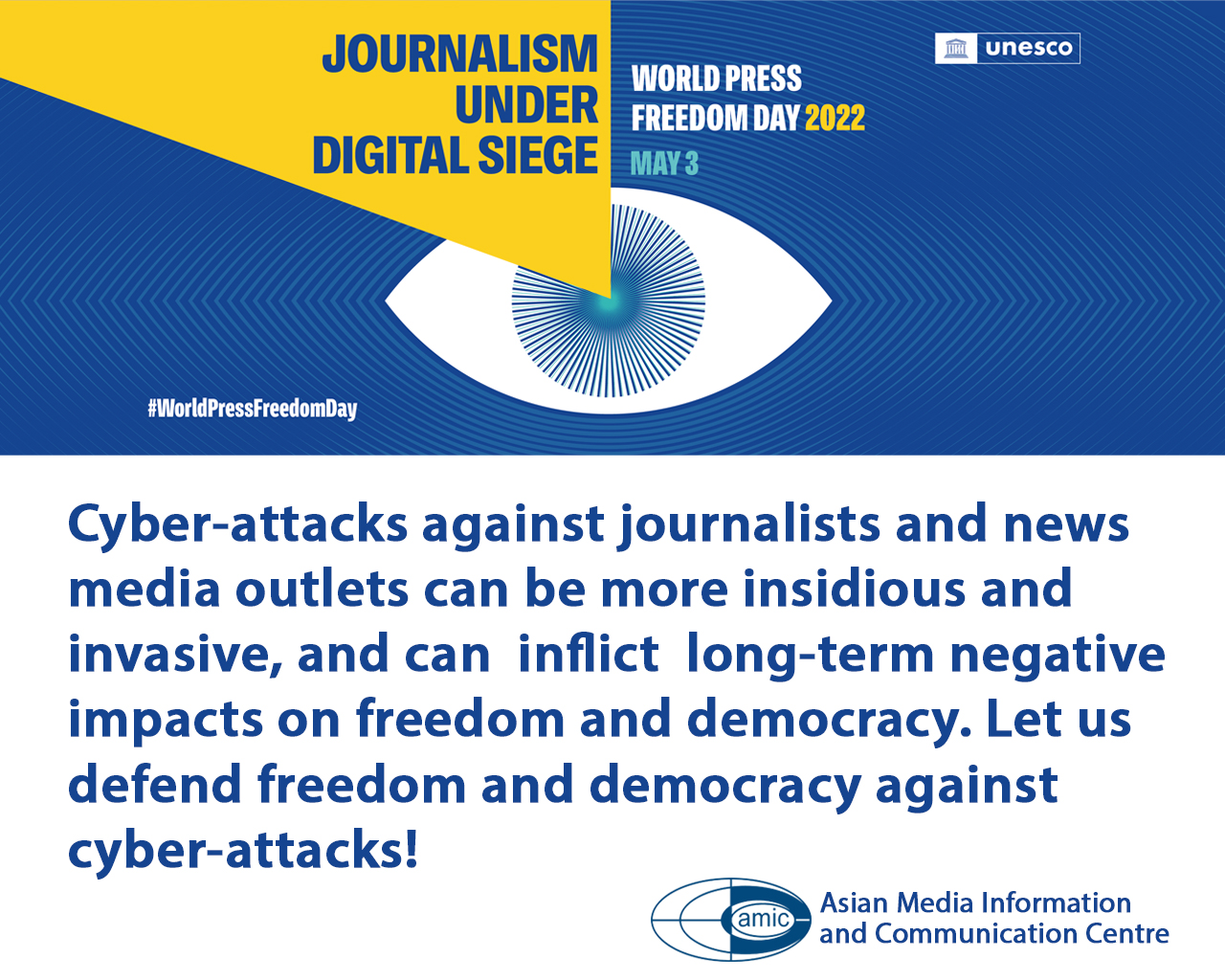 AMIC joined the global community in commemorating this year’s World Press Freedom Day (WPFD) on 03 May 2022.

World Press Freedom Day (WPFD) was conceived in 1993 to remind people all over the world of the need to protect and defend press freedom at all times, especially in challenging times.

The theme of this year’s commemoration is “Journalism under Digital Siege.”  The objective is to spotlight the various ways by which advanced technology is being used in many countries to curtail press freedom.

The 2022 UNESCO WPFD Concept Note warns that surveillance operations undertaken by state and non-state actors can be more disproportionate, invasive, and longer lasting, without journalists being aware of them or being able to defend themselves. 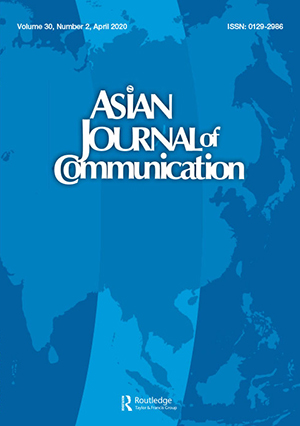 Asian Journal of Communication (AJC), Volume 32, 2022, Issue 3, is now up and accessible online, while the journal is earning steadily rising scores in citation performance or Impact Factor (IF), according to Dr. Peng Hwa Ang, Editor in Chief.

“I suspect the rise may be due to the wider reach as we have promoted published articles through social media—specifically Facebook and Twitter—with the help of our social media editor,” said the Editor.

AJC, the flagship research journal of the Asian Media Information and Communication Centre (AMIC), was founded in 1991 as a platform for Asia-Pacific perspectives in communication research.  It appears six times a year and is co-published by the National Technological University (NTU), Singapore.

(For the full backgrounder on the Asian Journal of Communication by the Editor, click here.

(Here’s the link to the current AJC issue: https://www.tandfonline.com/journals/rajc20) 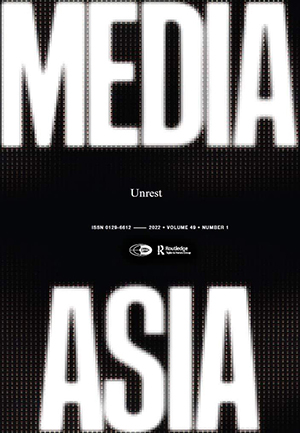 Media Asia continues to improve journal ranking as it publishes issues ahead of schedule.

Based on Scimago Journal & Country Rank data as of April 2022 (https://www.scimagojr.com/journalsearch.php?q=23067&tip=sid&clean=0), the quarterly journal’s highest quartile ranking is pegged at Q2 (Linguistics and Language). Scimago’s metrics are based on Scopus data which compute Media Asia’s CiteScore 2021 at 0.5 (https://www.scopus.com/sourceid/23067).

Based on the final decisions on submitted manuscripts from 2020 to 2022 (as of April only), Media Asia’s acceptance rates are computed at 10.65% (refereed articles) and 46.31% (non-refereed editorials, commentaries and reviews).

As of the first semester of 2022, the March, June and September 2022 issues of Media Asia are already published. As early as now, the issue line-up for December 2022 is already final and is expected to be published ahead of schedule as well. The issue themes for 2022 are Unrest (March), Struggles (June), Body Biases (September) and Mediated Youth (December).

Since the current editorial board took over in 2020, the journal has had increased manuscript submissions while successfully being re-indexed in Scopus. It has also established its presence on social media through its Twitter account @MediaAsiaJourn.