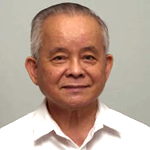 AMIC Board Chair Crispin C. Maslog has lamented the “martial law amnesia” that has affected most Filipinos today, especially the millennials.

Maslog warned against forgetting the past and allowing the Marcoses to return to power.

“Moving on without justice being served is not moving on – it is giving up,” reminded Maslog.

Maslog is a former journalist with Agence France-Presse, and former communication professor at Silliman University and University of the Philippines Los Baños.