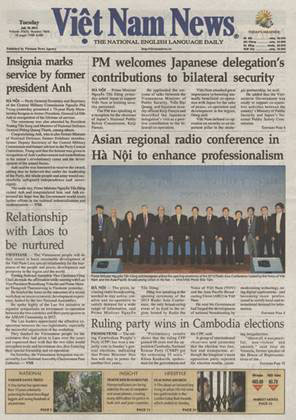 The Prime Minister of Vietnam has called on radio broadcasters to be more dynamic, creative and co-operative to meet the increasing demands of society.

Mr. Nguyen Tan Dung was speaking at the opening ceremony of the RadioAsia 2013 conference in Hanoi. The conference theme was Radio and Social Media: Where to Next?

“Digital technology and the booming social media have given the public greater access to diverse sources of information” he said. The Prime Minister noted that this is “gradually changing the media context in each nation and the world over”.

In his opening address, the President of Radio the Voice of Vietnam (VOV), Mr. Nguyen Dang Tien, said that VOV “has adopted the current trend and made good use of opportunities offered by social networks to diversify its programming”. He reminded delegates that VOV is the only national media organization in Vietnam with four media platforms- radio, television, print and on-line.

Also speaking at the opening ceremony, AMIC’s Secretary-General, Assoc. Prof. Martin Hadlow, said that radio still had a vital role in society. “The messages it carries are understood by all, even those who cannot read or write” he said, “and radio brings life-long educational opportunities, life-saving information, culture and entertainment to individuals no matter where they are, or what they are doing”.

The Secretary-General of the Asia-Pacific Broadcasting Union (ABU), Dr. Javad Mottaghi, told delegates that radio in a digital age “is going through a watershed change, with digital radio providing many possibilities for new content applications, data based services, graphics and still pictures”.

Digital technologies and the impact of social media on radio broadcasting were key issues discussed at  RadioAsia, the region’s premier conference dedicated to the medium. The three day event, which brought together several hundred delegates and speakers, was hosted by Radio the Voice of Vietnam and co-organised by AMIC, the ABU and VOV.