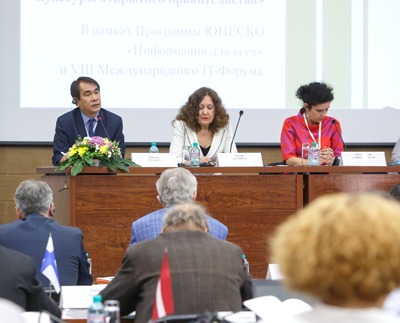 Public Information Officers (PIOs) worldwide should be among the prime movers in the pursuit of open government. This was the main message of AMIC Secretary General Ramon R. Tuazon during the International Conference on Media and Information Literacy for Building a Culture of Open Government. It was held in Khanty-Mansiysk, Russian Federation from June 6 to 10, 2016.

Mr. Tuazon was one of the plenary speakers of the forum.  According to him, PIOs play a key role in promoting and pursuing transparent, accountable, and citizen-oriented governance. These values are consistent with open government principles.

However, he warned that PIOs face challenges in the practice of open government. Traditional values, mindsets, and customs in the working environment—specifically, the governance culture in some countries —can pose hindrances to an open government. Prevailing governance culture in many societies includes “culture of silence” and “culture of good news only.”

To Tuazon, the culture of open government demands reengineeringpublic information principles and work processes as well as developing appropriate competencies and mindsets, as there is still resistance among many governments  to easy access to information by the public.

What are some actions needed?

According to the AMIC SG, there should be recognition and acceptance among traditional PIOs that change is inevitable and must be reflected in all dimensions of competencies—knowledge, attitudes, values, and behaviors.

Tuazon also believed that public information should not be perceived as a separate element of governance. Transparency, accountability, and citizen participation should be second nature to all government transactions and programs.