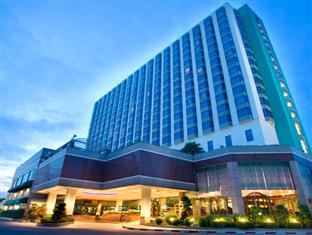 Preparations for AMIC’s 2014 conference in Bangkok (9th-12th July) have taken a significant step forward with the naming of the Chaophya Park Hotel as the venue for the prestigious annual event.

The Chaophya Park Hotel is located in Ratchadapisek, close to major shopping complexes and entertainment centres. It boasts a range of restaurants, conference rooms and a major ballroom. The hotel is easily accessible through the newly opened subway system, which is also linked with Bangkok’s Sky Train. The nearest MRT station, Rachdapisek, is only a 5-minute walk from the hotel. The city’s two major airports are also readily reachable by taxi or train. http://www.chaophyapark.com

In addition to the Chaophya Park Hotel, several other budget hotels close to the main venue will also be available for AMIC conference attendees. Details of these hotels will also be provided shortly.

AMIC Secretary-General, Martin Hadlow, thanked the conference hosts, Chulalongkorn University, for choosing such an excellent venue for the AMIC 2014 event.  He also called on prospective delegates considering attending AMIC 2014 to get their abstracts to the AMIC Secretariat as soon as possible. “The clock is ticking” he said, “and we look forward to receiving a flood of abstracts and paper proposals before the 4th April deadline.”

This year’s conference theme is Communicating in an e-Asia: values, technologies and challenges. The Call for Papers is available at www.amic.org.sg.