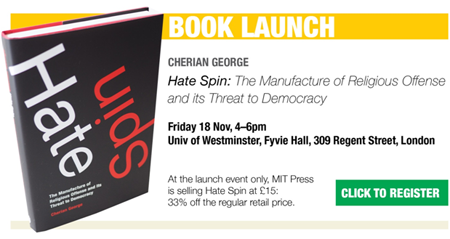 This November 18, 2016, the Westminster Institute for Advanced Studies and the Communication and Media Research Institute of the Westminster School of Media Arts and Design is marking the global release of Professor Cherian George’s new book Hate Spin: The Manufacture of Religious Offense and its Threat to Democracy.

Published by the MIT Press, the book was earlier released in September 2016. Authored by Prof. Cherian George, this tome touches on religious intolerance, one of the main problems that beset many nations today.

Prof. George sees religious intolerance not as random and isolated, but part of a dangerous pattern of politics that he calls ‘hate spin’. A two-pronged weapon of identity politics, hate spin combines incitement to hatred with orchestrated outrage against perceived insults. It is not spontaneous, but manufactured by political opportunists to mobilize supporters and marginalize opponents.

He argues that hate spin requires a public response that is at least as resolute as the campaigns engineered by modern purveyors of intolerance.

Prof. George is Associate Professor in the Department of Journalism at Hong Kong Baptist University. He is editor of the Asian Journal of Communication, one of two journals published by the Asian Media Information and Communication Centre, Inc.