India’s “alternative” freedom and democracy empowerment in action … as portrayed at the AMIC2018 communication conference at Manipal University, Karnataka.

“Fake news” combined with a lack of critical media judgment by many in the millennial generation is a major challenge to democracies across the world, says a leading Indian communication academic. 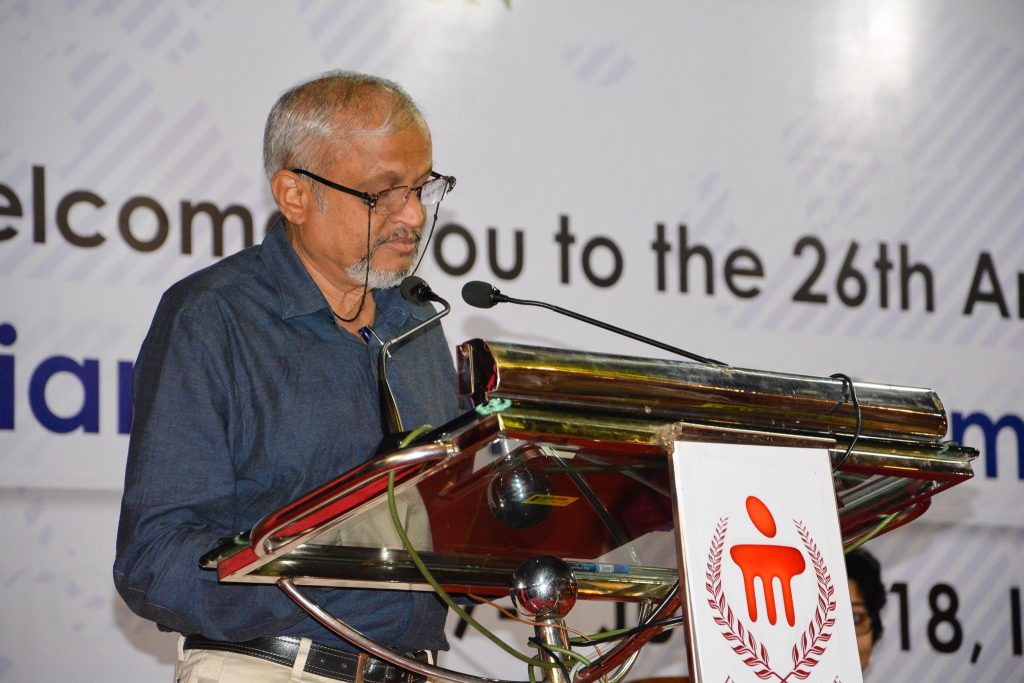 Speaking at the 26th annual conference of the Asian Media Information and Communication Centre (AMIC) conference with the theme “Disturbing Asian millennials: Some creative responses”,Professor Bharthur Sanjay, pro vice-chancellor of the University of Hyderabad, said the vulnerability of some states in the face of the social media crisis had led to a default response of shutting down the internet in “volatile contexts”.

In the case of India and some states, efforts to formally regulate fake news with legislated responses were withdrawn.

Papua New Guinea is an example of an Asia-Pacific country where a government minister has threatened to shut down Facebook for a month to research so-called “fake accounts”.

The WhatsApp social media platform – widely used throughout Asia – was cited as a leading outlet for disseminating fake news.

“Fake news” is a misleading term because of its wide-ranging intepretations, says Professor Sanjay of the University of Hyderabad, at AMIC2018. Image: David Robie/PMC

“Fake news is a bit of a misleading term, as fake news can mean many things – a mistake, intentional misleading, twisting a news story, or fabricating a complete lie,” Dr Sanjay said, quoting Pankaj Jain, one of India’s most active ‘fake news slayers’..

In the opening address at the host Manipal University (MAHE) in Karnataka, South India, Dr Sanjay said that while news media organisations and credible journalists had been found to publish misleading stories and mistakes, the most damage was done by people with fake social media profiles, polarising websites, and social media sites seeking to intentionally spread fake news to win elections or promote hatred.

Formal education contexts featured debates about the public sector, commercialisation and privatisation while a “default faith” was placed on new media that could virtually bring “handheld” education to the millennials.

This was a field that the public and private education sector intended to reach out to through online education and learning tools and options, said Dr Sanjay.

He said the euphoric underpinnings of the digital era in the Asia-Pacific and its subregions of ASEAN countries, South Asia and the Southeast Asia had parallels in the colonial and postcolonial periods with a technocentric dimension.

Digital destinations across genres would capitalise on the profile that was non-English.

Information was considered an enabling and empowering input.

The speed with which it travels through multiple platforms has raised concerns about legacy media content through adaptation or user-generated content, Dr Sanjay said.

Higher trust
Apart from ethics, the legacy media enjoyed higher trust based on its screening and verification processes.

The millennials profile was not uniform across countries and the kind of content had come into sharper focus.

A critique of the content was an issue for both academic discourse and legal and regulatory frameworks, Dr Sanjay said.

Extension models of higher education seemed to suggest that they could be tapped to bring skilled youth into the workplace.

AMIC chairman Professor Crispin Maslog of the Philippines said the millennials were the largest such generation in history – “and we ‘centennials need to understand them’.”

“There are some 1.8 billion out of the 7 billion global population – and they love smart phones. Of that 1.8 billion, 600 million are Asian.”

Redefining millennial life
Millennials, sometimes known as the “echo boomers”, are generally regarded as the 16 to 34-year-olds – the “digital natives’ who are not just consumers of media, but produce their own media content.

Globalisation, migration and technology are some of the major factors redefining the millennials’ way of life.

Most of the 200 academics from 15 countries at the conference presented papers on millennials education research and innovative case stories.

One of the conference highlights was a “Free/Dem” panel dialogue and presentation about communication for and by young people in practice.

Deepika and Summi, programme associates of India’s Feminist Approach to Technology (FAT), gave inspiring addresses in Hindi about how their movement had worked across the continent to give girls in poverty-hit communities the opportunity to work with computers and learn technical skills.

“When I saw people using computers, I wanted to be able to do the same,” said Summi, a 13-year-old from a very poor urban neigbourhood where girls never got an opportunity.

“Now I am able to help other girls to do the same.”

One of the performers in the Yakshagana Kendra cultural show at AMIC2018. Image: David Robie

Creative communication and culture were also major parts of the programme, including an episode of Jataaya Moksha performed by MAHE’s creative arts school Yakshagana Kendra.

Launching a report on “World Trends in Freedom of Expression and Media Development“, New Delhi-based national UNESCO programme officer Anirban Sarma, said that while new media had expanded freedoms and communication beyond the media, there had also been “increasing incursions into proivacy and an expansion of mass and arbitrary surveillance”.

“The rise of new forms of political populism as well as what have been seen as authoritarian policies are important developments,” says the report based on a survey of 131 countries.

“Citing a range of reasons, including national security, governments are increasingly monitoring and also requiring the take down of information online, in many cases not only relating to hate speech and content seen to encourage violent extremism, but also what has been seen as legitimate political positioning.”

Filipino Charlie Agatep – a public relations guru in Asia – made a passionate video plea for more courageous, rigorous and accurate journalism as an antidote for “fake news”.

He was also critical of the “digital acrobats” who swept Rodrigo Duterte into the presidency in 2016 and who still manipulates and distorts public opinion in the Philippines.

Agatep founded the PR agency Agatep Associates in 1988 and transformed it into Grupo Agatep Inc., the largest marketing and digital (social media) communication agency in the Philippines.

He was one of two AMIC Asia Communication Award in Transformative Leadership recipients for 2018. AMIC recognised him for his role as “shaper of many professionals who have learned from his artistry” across diverse Asian audiences, and for his efforts to reach out to youth.

The other was Manila-based Father Franz-Josef Eilers, an inspirational Catholic church and social justice communicator of the Society of Divine Word (SVD). Among many achievements, he helped establish the Asian Research Centre for Religion and Social Communication (ARC) at St John’s University, Bangkok.

AMIC presented the award to Father Eilers in recognition of his “outstanding contributions to church and social communications, and in appreciation for the church communication institutions he has built”.

The conference was hosted by MAHE’s School of Communicationwhose director, Professor Padma Rani, thanked ZEE television, UNESCO and the many sponsors and her “fabulous” faculty team for the successful outcome.

Next year’s conference will be hosted by Chulalongkorn University in Bangkok, Thailand.

A brief clip from a community journalism promotion video produced for the Manipal University School of Communication and screened at the university’s “experimental theatre”.

Dr David Robie is professor of journalism and director of AUT University’s Pacific Media Centre. He is a strong advocate of independent journalism at the country’s journalism schools. He is co-founder with Selwyn Manning of Pacific Scoop and manages the Pacific Media Watch media freedom project; he is also founding editor of Pacific Journalism Review research journal.