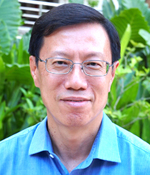 Dr. Ang Peng Hwa, AMIC Chairman d’Honneur, urges the conduct of more research on social media, noting its varied uses and users all over the world in his keynote address.

He made these remarks  at the International Conference on Media, Communication and Sociology (ICOMOS) held at Atma Jaya Yogyakarta University on November 18-19, 2016.

ICOMOS 2016 had as its theme Questioning Locality: Community, Movement and Global       Challenge: Moving Beyond Borders: The Shifts in Communications
and Media Studies in Borderless Society.

“The strength of the Internet is not in communication, but in the mobilization of time,” said Dr. Peng Hwa, adding that the Internet also enables the  microcoordination of resources and  people.

However, to benefit from it, communication scholars must sift the good from the bad elements in social media.

It can create echo chamber and bubbles, making people listen only to themselves and their ideas.

Dr. Peng Hwa said all media have inherent values and biases that ultimately shape society. While people shape the medium we use for communication, the medium also shapes us.

He noted that with quick computer time and gadgets, people now give shorter messages and quicker responses, but without much depth of thought.

“We may need law and policy to compel balance in the media space and restore the fairness doctrine where both sides are presented,” asserted Dr.  Peng Hwa.