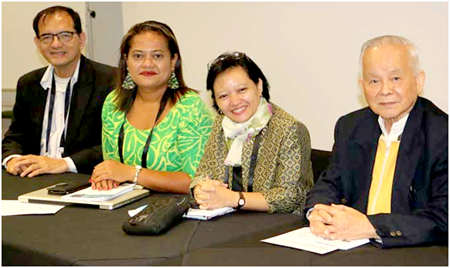 Dr. Maslog was sponsored by the New Zealand Foundation, while Joe Carlos was funded by the Pacific Media Centre in Auckland, headed by Dr. David Robie, AMIC Asia Communication Awardee in 2015.

The traditional welcome was led by AUT students and staff. The conference brought together more than 220 media and journalism educators from 42 countries around the world for three days of discussions about global media challenges and education.

Dr. Maslog and Mr. Carlos participated in the panel on Post-Cop 21 – Journalism Education in Asia-Pacific: Responding to Key Issues on Climate Change. The panel, chaired by Robie, was unanimous in saying that there is a critical need to educate journalists in the region on the problems brought about by climate change, and for the schools to start offering courses on environmental reporting. So far very little is done in this area.

Dr. Maslog also joined another panel on Global Mass Communication and Journalism Research, chaired by Dr. Alex Tan of Washington State University in the U.S. The panel was meant to provide input to a book on research being planned by Dr. Tan.
The Congress voted on Paris as the site of the next WJEC Congress three years from now in 2019.