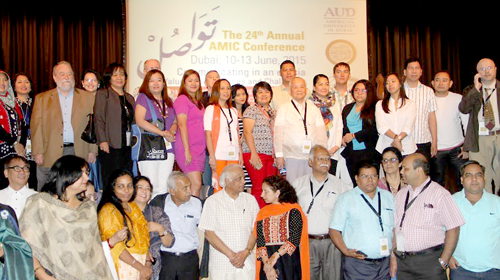 Hosted by the American University in Dubai (AUD), the Conference carried the theme Communicating in an eAsia: Values, Technologies, and Challenges. It was AMIC’s first time to hold its annual conference in the Gulf region. The event was widely covered by the Dubai media.

The Conference was attended by about 180 participants, two-thirds of whom were foreign delegates from various continents, including Asia-Pacific, North America, and Africa.

The keynote speakers were Ms. Erin Burnett of CNN, and Professor Philip Seib, Vice Dean of the Annenberg School of Communication and Journalism, University of Southern California.

The AMIC Distinguished Forum was also held, with the theme Communication and Media Education in an ‘e-Century’: Future Perspectives, Opportunities and Challenges.

The UNESCO Emeritus Dialogue, with the theme Changing Roles, Shifting Perceptions:Gender and Diversity in the Digital Environment, was also held as a special section during the Conference.

Special breakout sessions were also include in the conference, with the themes Media and Health in Asia: Exploring a Core of Asian Cultural Issues(with Dr. Muneo Kaigo of University of Tsukuba, Japan, as session chair), and Challenges for Emerging Media in the Arab World (with Dr. Moussa Barhouma, AUD).

The plenary closing session was held with the theme E-Communication in the Arab World: Technologies, Opportunities and New Frontiers.

While he was cited in 2014, Mercado received the AMIC Communication Award only this year. The 2014 International Conference slated to be conducted in Bangkok, Thailand was cancelled following the May 2014 coup in this country.

AMIC also recognized the significant contributions of three institutions that nurtured and sustained the organization in the past 44 years—the Government of the Republic of Singapore, Friedrich Ebert Stiftung, and Nanyang Technological University.

Eminent Filipino communication scholar Dr. Crispin C. Maslog took over from Arun Mahizhnan as chairman of AMIC’s Board of Directors.

With his appointment, Dr. Maslog comes full circle at AMIC. He was part of a select group of Asian scholars and practitioners who conceptualized AMIC in Singapore in 1971.

AMIC convenedits Annual General Membership Meeting on June 11, during which the members agreed to ratify the earlier decision of the Board of Directors to transfer the AMIC headquarters from Singapore to Manila, Philippines.

The Philippine Women’s University-Asian Institute of Journalism and Communication (PWU-AIJC) consortium will host the new headquarters.

In his letter to the AMIC members, Secretary-General Tuazon said that while AMIC’s transition is fraught with daunting challenges, he hopes continuous dialogue will bind the members together and strengthen the organization. He thanked the members for their continued support since his interim appointment in September 2014.

He also reiterated AMIC’s gratitude to AUD for hosting the conference and “for coming forward at a crucial time when AMIC needed help in boosting its membership andin expanding its frontiers to other parts of Asia.”

Photos of the 2015 AMIC International Conference can be viewed at:

Credit should be given to the AUD.