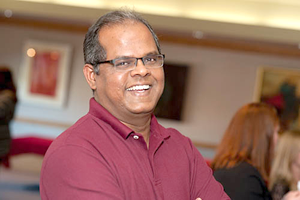 Former AMIC Secretary General Sundeep Muppidi, PhD, was named one of 46 American Council on Education (ACE) fellows for the 2017–18 academic year. Muppidi, who has been a faculty member at the University of Hartford since 1998 and associate dean for the past two years, was nominated for the fellowship by University President Walter Harrison.
Dr. Muppidi is professor of communication and associate dean for academic planning and curriculum in the University of Hartford’s College of Arts and Sciences.
He was AMIC secretary general from January 2010 to December 2012. See http://unotes.hartford.edu/announcements/2017/04/2017-04-05-professor-of-communication-sundeep-muppidi-receives-prestigious–american-council-on-education-ace-fellowship-.aspx

UNESCO is looking for people interested to present research on “Safety for women journalists”.

UNESCO’s previous research studies have shown that while the number of women journalists killed is much lower than those of their male counterparts, women journalists are particularly susceptible to other kinds of gender-related attacks.

According to Guy Berger, UNESCO Director for Freedom of Expression and Media Development, women covering conflict and socio-political turmoil have particular concerns for their safety. Even in non-conflict situations, there is the risk of gender-linked sexual harassment, online abuse, direct and indirect threats, as well as actual physical violations, including rape.

UNESCO is setting up an academic panel for the conference in Cartagena, Colombia on 16-20 July 2017 of the International Association for Media and Communication Research (IAMCR) to look at gender-related media safety issues.

UNESCO hopes that the panel can elevate gender-related media safety issues on the academic agenda by examining the extent, nature, causes and responses related to gender issues in media.

The panel will also seek to uncover the impact of these attacks on the women journalists themselves, their families, colleagues and audiences; and on their societies more broadly.

Presentations with a gender angle could cover any of the areas of research identified in the UNESCO document “Towards a Research agenda on the safety of journalists.”

While there is no budget to support attendance of presenters, the chosen researchers can present on this UNESCO panel and use this status to secure alternative funding, such as from their respective university or organization.

Interested parties can express their interest and a draft abstract (approx. 150 words) by 7 February 2017 to Saorla McCabe, S.McCabe@unesco.org

UNESCO’s research document on media safety can be accessed at http://www.unesco.org/new/fileadmin/MULTIMEDIA/HQ/CI/CI/images/Themes/Freedom_of_expression/safety_of_journalists/Draft_Research_Agenda_Safety_of_Journalists_06_2015.pdf