After four days of intense and intellectually stimulating discourse on a diverse variety of communication subjects and issues in both plenary and parallel sessions, the conference concluded with a final plenary on New Media, Old Media Ethics, followed by a grand closing ceremony.

Dean of the Faculty of Social and Political Sciences at UGM, Dr. Erwan Agus Purwanto, represented the UGM Rector, Dr. Pratikno, at the concluding event and thanked all delegates for participating in the conference. Also present was Dr. Hermin Indah Wahyuni, UGM conference organizer, who led a team of more than 70 staff and students which provided support throughout the event.

The AMIC Asia Communication Award was also presented during the conference. This year’s awardees are both Indonesian- Professor Alwi Dahlan of the University of Indonesia and Mr. Jakob Oetama, CEO of the Kompas-Gramedia group.

Feedback from conference delegates has been uniformly appreciative, with many congratulating UGM and AMIC on conference preparations and proceedings. UGM’s generosity as hosts was noted as being exemplary, while the smooth-flow of the event said much for the intense planning which had been made by both AMIC and UGM.

At the closing ceremony, AMIC Chairman, Professor Ang Peng Hwa of Singapore, expressed AMIC’s profuse thanks to the hosts and sponsors, and called on delegates to gather again next year for AMIC’s 23rd international conference. The location and venue have yet to be named.

Yogyakarta conference activities are highlighted on the AMIC web-site at www.amic.org.sg
Full conference papers are also available at http://amic.org.sg/conference/AMIC2013/PROCEEDINGS.htm

Changes to AMIC Board

Five new Directors were voted onto AMIC’s Board at the organization’s recent Annual General Meeting (AGM) held in Yogyakarta.

The changes were part of the standard election process under AMIC’s Constitution.

Professor Ang thanked the out-going Directors for their service and commitment to AMIC. In welcoming the incoming Board members, Professor Ang said he had no doubt that AMIC’s intellectual capital is on an upward trajectory and that the Board would take it further. 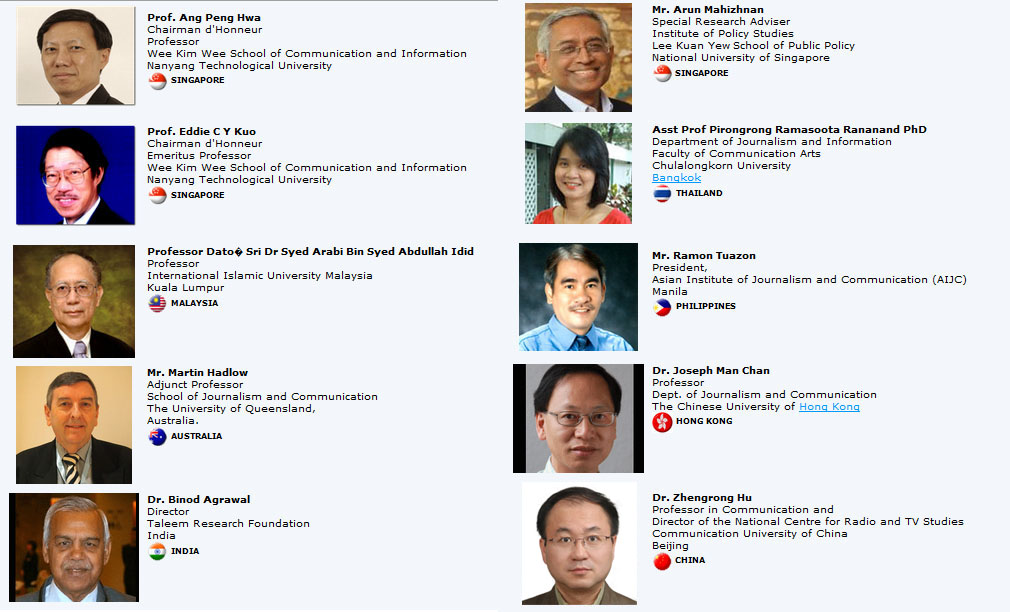 The new Board is expected to elect a Chairman during a tele-conference to be held this month. 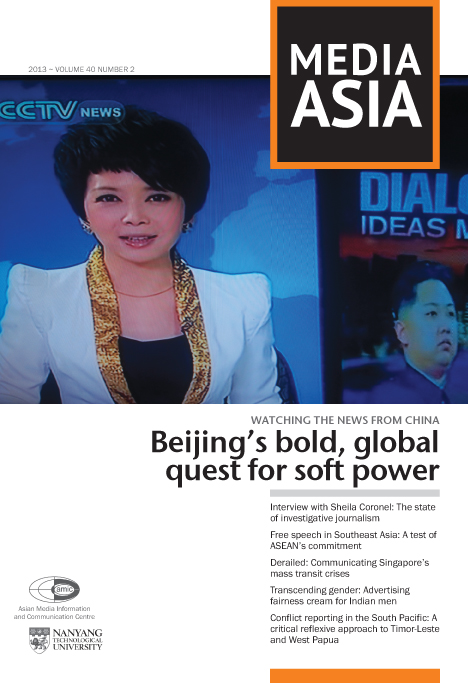 From research papers on conflict reporting in the South Pacific to the achievements of a village knowledge centre in Pondicherry, the latest edition of AMIC’s Media Asia enjoys geographical reach across the Asia-Pacific region.

In his Pacific paper, award winning former investigative journalist, Professor David Robie from the Auckland University of Technology, examines ‘peace journalism’, the conflict-reporting framework in the region and articulates case studies in Timor-Leste and West Papua.

From India, PhD Research Scholar, Arpita Sharma, looks at a project in Pondicherry which aims to empower the poorest of rural villages by giving them access to knowledge via networked ICT. Can seemingly intractable problems of technological complexity, network connectivity and user illiteracy be overcome?

In a front-page story on “Beijing’s bold, global quest for soft power”, Media Asia Editorial Assistant, Suruchi Mazumdar, contends that China is catching up with the economic might of the USA, but that American soft power may be a harder act to follow.

Media Asia Vol. 40, No. 2, also offers readers chapters on a range of other key communication and media issues under its reportage, interview, insights and

Media Asia is AMIC’s quality, quarterly journal and is available for purchase on-line at www.amic.org.sg

Many of the full papers presented at AMIC’s 2013 conference in Yogyakarta are now available on-line.

To access the papers, go to http://amic.org.sg/conference/AMIC2013/PROCEEDINGS.htm and click-on the relevant plenary session. The full range of papers available for reading then opens. Click on the title of the paper for access.

Some conference presenters have submitted their papers to journals elsewhere and have therefore requested that they not yet be made available on AMIC’s web-site.

Health Under the Microscope

AMIC’s flagship Asian Journal of Communication (AJC) has made a call for papers for an international special issue on Health Communication in the New Asia.

In the past five decades, many Asian countries have witnessed rapid urbanization and economic growth.  Challenges to public health have multiplied beyond developmental and rural contexts to suburban, urban and migratory landscapes.  The AJC is now seeking manuscripts which focus on how health communication has played, and can continue to play, a role in addressing the multiple health challenges facing Asia in the 21st century.

Guest editors for this special issue are Associate Professor May Lwin and Professor Charles T. Salmon, both of the Wee Kim Wee School of Communication and Information, Nanyang Technological University, Singapore.

Abstracts should be forwarded to Assoc. Prof. May O. Lwin at tmaylwin@ntu.edu.sg